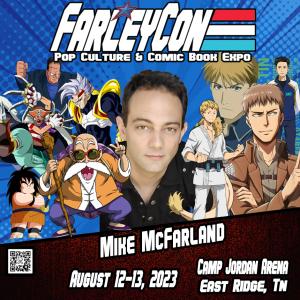 Mike McFarland has been acting professionally for over 20 years in various capacities, but is most known for his voice work in animation and video games. Notable roles include “Master Roshi” in DragonBall Z and DragonBall Super, “Jean Kirstein” in Attack on Titan, “Lt. Jean Havok” in Fullmetal Alchemist and Fullmetal Alchemist: Brotherhood, “Ojiro” and “Ectoplasm” in My Hero Academia, “Buggy” in One Piece, “Amon” in Tokyo Ghoul, “Gordon” in Black Clover, “Carnage Kabuto” in One-Punch Man, and “CainNightroad” in Trinity Blood, all as seen on Cartoon Network. Other fan favorites include “Estonia” in Hetalia and “Otabek Altin” in Yuri!! On Ice. Mike’s voice can be heard in the gaming world as “Paul Phoenix” in Street Fighter X Tekken, “Charlie Nash” in Street Fighter V, and on such titles as Borderlands 2 & 3, Aeon Flux, Halo Wars, Orcs Must Die!, Tales of Xillia 2, and Smite.
As an ADR/Voice Director, Mike has helmed many of the titles listed above, as well as the Evangellion: Rebuild movies, Summer Wars, Wolf Children, The Boy and The Beast, Eden of the East, Blood Blockade Battlefront, and many more.
Facebook: Facebook.com/public/mikemcfarlandfans
Twitter: @MikeMcFarlandVA
Instagram: MikeMcFarlandVA